There are already millions of infographics these days (f.e. Infographic World, Daily Infographic or even on Pinterest).

Some are very good, some are less good depending on data, purpose and intention what to inform about or what message to tell as well as the design. I am following actually Daniel Zeevi how to judge a good infographic.

His overview gives a good idea and standards for the creation of infographics: 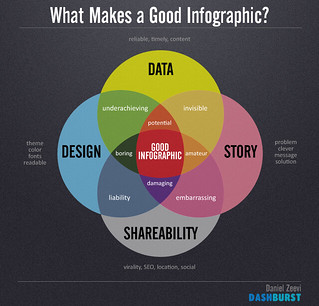 Photo Credit: What makes a good Infographic by Daniel Zeevi via flickr.com

In addition to the above-mentioned three criteria, which I totally agree with, he lists shareability. Zeevi asks:

How relevant is the infographic? How much does it interest the audience? Is it optimized for the web and the search engines? Can it be shared through social media?

The two questions and also the thoughts Jeff Utecht expresses on Time Creating vs Time Learning made me think. He wrote:

He is kind of right – it takes time, which is good, but what does it really mean – to be worth sharing, to be interesting, to be relevant? To who will it be interesting, relevant and worth? Isn’t is very subjective? There is a great infographic about the life of Steve Jobs but I know a lot of people who are absolutely not interested in him. The same is valid for a presentation or any digital story. My story was about living your dreams. For some people it hopefully is something inspiring, for others nothing new and boring. In my opinion shareability in terms of relevance and interest is very subjective and depends on each single person. Or is there something like a common shared relevance?

Soon then some ideas how to use infographics in class …

I think I mentioned already that I’m a big fan of Kath Murdoch and the inquiry approach of teaching and learning. Last week I had the chance to listen and talk to her because she was 2 days at our school. One sentence she said kept in my mind:

Inquiry is all about self-knowledge.

I’m convinced that this is true because I experienced it so many time by myself. If you are curious about a deeper understanding of yourself as a learner and your learning path then the Inquiry Cycle of Kath Murdoch helps. Just try to remember what gave you a tuning in? What did you do for finding and sorting out? Even more important what was your going further? The cycle probably also helps when you feel kind of stucked. I can use the cycle for small things as well as bigger projects. Give it a try.
Today I tried to reflect on the use of technology for teaching and learning. Here is the result:

If we understand the inquiry cycle as learner then it will be easier for us to let the students inquire into their wonderings and passions.

It’s amazing and I can’t describe how thankful I am how the network works and how much I am learning. It seems to come all together at the same time. Just a few examples:

One thing I really appreciate almost the most is that I find through COETAIL people who are likeminded. At school (LS) there is one person who is as interested in the revolution like many COETAILers seem to be. By the by she just thinks we should do a geek weekend. 😉 I feel free to speak about my visions and passions and this is something I rarely ever experienced before.

Today I started getting into the ISTE Nets for Teachers. WOW – I’m so fascinated by the fact that something like this already exist for a while. It took me 2 1/2 years working in an international school environment to find them. I really recommend to have a look.

From my perspective it all starts with the willingness to get engaged in professional growth. It will open our eyes by itself. Second step probably is to share your own professional growth, your learning and your visions as well as to model digital citizenship.
And the moment I feel like a bubbling bottle of coke (thanks Astrid for this expression). I would love to speak the whole day about nothing else. But how can I reach others? I wish to be somebody who is opening eyes. What kind of support can I give?

The ISTE organisation also provides Essential Conditions. The document showed me that probably everybody of us does already a lot. But still everybody could ask the following (and even more) questions:

I can’t remember fully when I heard the words nerd and geek the first time in my life. Probably it was during my time working for a Software Company as a trainer for their products. I thought some of my colleagues were nerds/geeks and for some reasons I was very impressed by them.

In theory everybody can be a geek and geeking out (Living and Learning with New Media, page 28ff.) on the internet. Compared to hanging out and messing around it is very intense, only interest-driven, therefore very knowledgeable, and highly social and engaged learning. Another big difference is the fact that

geeking out engagement involves accessing as well as producing knowledge to contribute to the knowledge network. (page 29.)

At the beginning of the year I read about the sad news of Aaron Swartz (Wikipedia) who killed himself. Unfortunately it was the first time I heard from him – probably I was / I am not geeky enough to hear from him early (or because I’m not surrounded by geeks anymore). It difficult for me to list what he was involved in and what he was fighting for – Wikipedia does it’s job. Anyways – I’m still very impressed by his knowledge, engagement, activism, understanding of complex topics, networked thinking, etc.

Today at school I had a group of five students (Grade 5) and I took some time to ask them what they are actually doing when they are on the internet. They definitely all playing games like f.e. Minecraft – hanging out with friends (chatting, etc.) and also kind of messing around (producing Minecraft-videos and posting them on youtube).

It’s a start but as a educator it would be great to support them to become more skilled on the internet, to use technology in a geeky way, to use their networks and eventually do action on whatever they are passioned about. Like Aaron Swartz who died way to early.

After watching the following speech of Will Richardson I couldn’t agree more:

It has to be about:

Here is Will Richardson Blog or follow him on Twitter @willrich45! He obviously also wrote a book called Why School? although I haven’t read it (yet).